Aleppo, Kharkiv, the martyred cities of our time 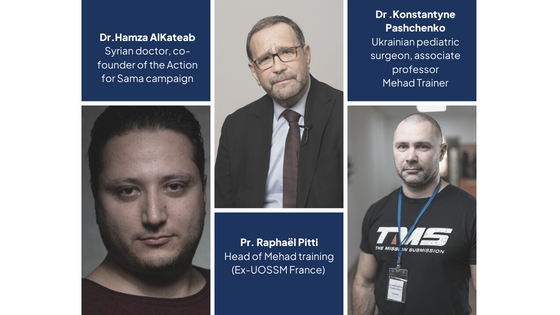 December 23, 2022, 6 years ago ended the evacuation of Aleppo of its inhabitants, after a long agony of several months of bombing hospitals, schools, and civilians. On this day of tribute to Aleppo, Professor Raphael Pitti, a French doctor, Dr Hamza AlKateab, a Syrian doctor and refugee from Aleppo and Dr Konstantyne Patshchenko, a refugee from Kharkiv, wanted to write a letter  6 years later to mirror the tragedy of Aleppo in 2016 and Kharkiv in 2022.

Letter to people of goodwill by Prof. Raphael Pitti

I have just returned from Ukraine where a human mission took me to Kharkiv. A strange feeling comes over me. Gutted buildings, a city emptied of its inhabitants, between disenchantment and heartbreak, the martyred city of Kharkiv echoed my humanitarian missions in Aleppo in Syria. Like a feeling of déjà-vu for two cities with similar fates, that of a war crime where free populations are forced to flee under the bombs. Aleppo, and Kharkiv, are two martyred cities that respond to each other ... When the "never again" does not seem to make sense.

In my journey, they are embodied through two encounters, two doctors who have marked my path: Dr Hamza Al-Kateab, a Syrian doctor, and refugee from Aleppo met in 2013 and Dr Konstantyne Pashchenko, a pediatric surgeon Ukrainian, a refugee from Kharkiv, who I met in 2022. What they have in common: a doctor at any cost against bombs and destruction, they made the choice to stay in a bombed city and had to leave it by force in the face of the tragedy of war. Two heroes of our time.

With Christmas and the end of year coming, which is synonymous with fraternity and solidarity, I suggested that they write this symbolic and solemn letter with me to people of goodwill.  First to those who can act, to our European leaders, the French president Emmanuel Macron in the first place, and to the international community, to public opinion to bear witness.  With six hands, a tribute letter to two cities Aleppo, emptied of its inhabitants forced 6 years ago to the day in December 2022 and 6 years later, Kharkiv in March 2022, which also sees half its inhabitants run away under the bombs.

The agony of Aleppo by Dr Hamza Al-Kateab

December 23, 2022, like every year, at this time for 6 years, the same feeling, the same pain, the day I was forced to leave everything, the land that saw me born, the one that saw me resist, my city of Aleppo, the cradle of civilisation, to which I gave everything. At the same time happy to be alive, to be with my family, my wife and my two lovely daughters, but still angry that I did not choose my destiny.

In 2011, I made the choice to stay to resist, to heal, and to save lives. As a doctor, but not only, as an activist for peace and freedom. With massive bombings, hospitals under attack, lack of everything, being a doctor in Aleppo was a constant risk. The hospital in Aleppo had become the most dangerous place in the world.

In 2016, I had no choice but to stay or die.  Faced with the agony of Aleppo and after a ceasefire, from December 15 to 22, the city of East Aleppo was evacuated of its inhabitants, under the supervision of the UN. What is often celebrated as a liberation is a war crime, the macabre outcome of the agony of Aleppo.

"The transfer, direct or indirect, by an occupying power of parts of its own civilian population, into the territory it occupies, or the deportation or transfer within or outside the occupied territory of the whole or part of the population of that territory."

Article 8 of the Geneva Convention describes the elements of a war crime.

Today, if I survived this tragedy, I must testify and denounce this war crime that I lived and millions of Syrians with me, not only in Aleppo but also in Deraa, Ghouta, Idleb...etc. In 2022, the war in Ukraine, the populations forced to leave as we did 6 years ago, give me a bitter taste, that of an unfinished business in front of a world that is collapsing before our eyes. I feel in solidarity with their resistance, with their fight. Each victory in Ukraine is also a victory for us, a hope that maybe one day we will be able to go back home.

Ukraine, an unexpected war in our lives by Dr Konstantyne Patshchenko

February 24, 2022, the war invites itself into our lives without warning. We are stunned, frightened, and lost in front of what we did not expect. What can we do? The escalation of bombings on the city of Kharkiv, located barely 40 km from the front lines, had taken its toll on us. I had to leave and take my family to safety. It was in March 2022. Leaving your home is not easy, you are stunned, destroyed from the inside, and you lose your footing. Very quickly, I wanted to regain control of my destiny, not only to live under the shadow of these atrocities.  In April, I decided to go back alone. The hospital I was working for had been moved elsewhere to avoid the attacks. Now, every day, the sirens sound and warn us of the bombs that may attack us. There are three or four bombings a night. Our hospital has been targeted by attacks and had to be partially evacuated. We have a constant influx of wounded including many children with multiple injuries.

Power cuts due to the bombing, and lack of diagnostic equipment, our resources are limited to treat as we used to. As a pediatric surgeon, seeing innocent children on the operating table is the hardest. Despair is never far away when faced with the agony of a child. As for Dr Hamza AlKateab, resilience is our source. The support in Europe and around the world helps us to hold on. The same should be true wherever the right to health is violated.

Syrian doctor, co-founder of the Action for Sama campaign